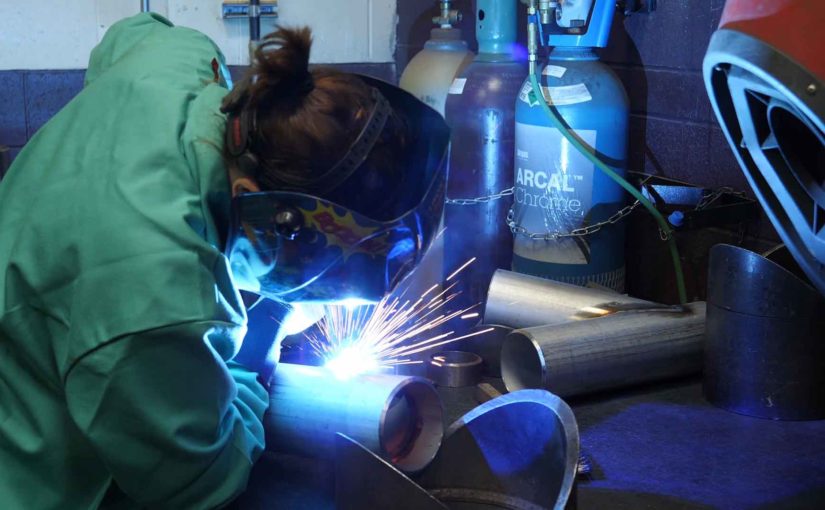 When you think of a welder, do you first think of a woman wielding a torch? Likely, you envision a man, which makes sense, given that metal fabrication has historically been a male-dominated profession. According to the Bureau of Labor Statistics (2017), as few as 4.5 percent of welders are women. The last time women made up a considerable percentage of the welding workforce was during WWII, when women made up 25 percent of the welder workforce. At that time, women stepped in to welding jobs that had been left behind by men who were sent off to war.

Fast forward to today and the deficit in skilled trade workers continues to grow. Not because men and women are called off to war, but because interest in trade occupations in general is down, with welding being hit particularly hard (2018). Some leaders in welding education see women as a potential solution to help fill the skills gap once again. But will they answer the call this time?

According to Sue Silverstein, a welder striving to drive change in the field, women absolutely should consider careers in welding, as there is ample opportunity and room for advancement. Silverstein is a welding instructor at Milwaukee Area Technical College (MATC) and spends her spare time organizing events for Girl Scouts to build young girls’ interest in welding and recruiting women into the Welding Diploma and Welding Technology Associate in Applied Science programs at MATC. Here, Silverstein talks about her passion and discusses how she believes women can help fill the gap:

Why should women weld?

Sue Silverstein: A career in welding offers women the opportunity to advance into positions of leadership in a field that is interesting, demanding and in-demand. Women who choose this career path are rewarded with good pay and benefits that help them maintain financial independence.

Welding requires great dexterity and focus, which are skills many women may have already obtained through work in more traditionally female fields or hobbies. I think it’s important for young women considering careers in the trades to find confidence in their previous experiences, because there could be more overlap than they think.

Welding is also an opportunity for women to establish themselves in scientific careers, since being a welder requires a thorough understanding of the chemical processes behind welding.

Have you found a community with other female welders?

There is a great sense of camaraderie among women in welding today, and it is important to nurture these networks to ensure a future with more females in the trades and to fuel continued growth. I followed a different path that lead me to a career in welding and I found other women along the way that have become great friends. It is a small, but really good, circle of friends, and any women joining us will have this same built-in support system.

What were some obstacles you faced when first starting your career as a welder?

I almost hate to say it because it gives credence to a female stereotype, but one of the biggest obstacles was in regard to welding clothes. I was incredibly limited with the types of Personal Protective Equipment available and I found it hard to find steel-toe boots and hard hats that were small enough for my build. Luckily, access to the right equipment has improved over the course of my career.

There is a misconception that manufacturing and labor trades can be monotonous. Is that true for welding?

The work itself is actually quite exhilarating. In fact, welding is a demanding and stimulating profession that offers its practitioners the opportunity to master a wide variety of skills. There is a lot to learn in a trade, which is great because who wants to be bored? A welder is continuously learning to master skills and grow in the profession.

A career in welding also puts you in the middle of the action. This action is what pulled me in. At first, I thought I wanted to be an engineer but later realized I wanted to be involved in manufacturing in a more hands-on way: I realized I didn’t want to just draw it. I wanted to physically make it.

The materials welders create are deeply interrelated with many other industries. Metal becomes a part of everything and can become anything. The end product goes into an office, someone’s home, a city’s skyline and the roads we travel and can even be launched into space. To have a hand in that is actually quite cool.

What can help break the stigma some women may believe about working in industrial settings?

Honestly, it’s all about exposure and perception. I became comfortable with workshops and factory environments from an early age. My father used to bring me into the auto plant where he worked on Saturdays so I could see a factory from the inside and it was fascinating to me. The thought of working with my hands and doing a physical job was never scary or intimidating. In fact, this familiarity is what helped empower me to seek an alternative path that was different from that of my peers and it drives me to provide the same perspective to younger generations of female welders.

In 2000, after 15 years as a welder, I shifted my focus to education. After my apprenticeship, I thought to myself, “I am learning so much, and as a physically small woman, I am learning new ways to do things.” It made me want to teach others.

What are the benefits of career exploration?

Career exploration is more about confidence building for those girls who maybe have not been encouraged to use tools, or maybe don’t have a parent in the trades. This will give them the exposure I had as a child and maybe, somewhere down the line, they will think about the trades as potential employment opportunities.

What lessons would you want a beginning welder to take from your example?

My legacy will be to have a bunch of successful students who have become successful welders who can earn a great, family-supporting wage so they can fulfill their dreams for the future.

Interested in women’s role in the future of welding? Don’t leave without checking out this related article:

Sue Silverstein's mission is to create a diversified skilled labor force of welders with a passion for metal work. Silverstein is a welding instructor at Milwaukee Area Technical College (MATC) and Girl Scout volunteer dedicated to helping young women build careers in the trades.

Great article, thanks for sharing Sue!

Thank you so much for sharing Sue! In high school I was torn between trades, Auto mechanics or Cosmetology. Because of stereotypes I went with Cosmetology and although I had a passion for both, I should have taken the mechanics route. Im not a cosmetologist and have been in the medical field for all of my working career, but now I am bored. I want to explore welding which I know I will love and at 43, I am ready to dive in and do what I know I will love. Thank you.

[…] to welding instructor and industry pioneer Sue Silverstein, a career in welding offers women the opportunity to advance into positions of leadership in a […]