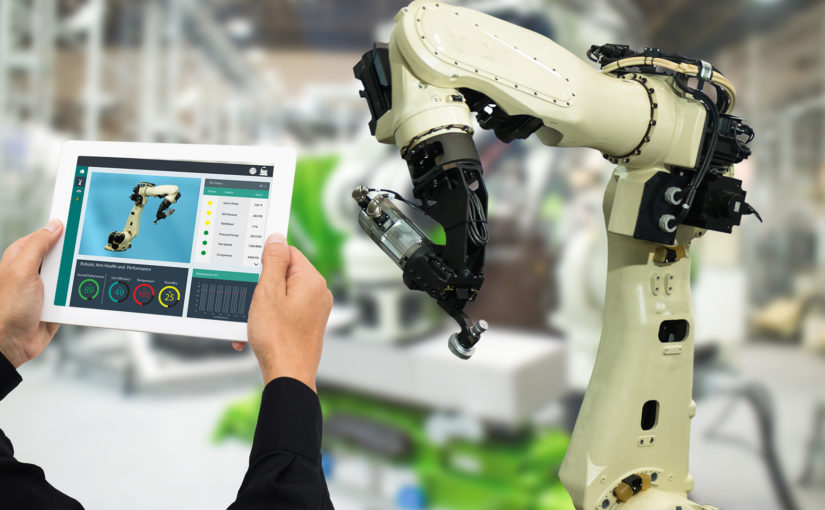 Jetpacks, hovercars and, most of all, robots.

From Phillip K. Dick to Isaac Asimov, creative minds of the 20th century envisioned a future of awe-inspiring technological advancements. And in many ways, they were right on the money; the world is being shaped by some pretty radical stuff. But until recently, the future didn’t quite come into fruition for the manufacturing and metal fabrication industry. What did they get?

Pray we don’t get fooled again

Only a few years ago, robotics was considered a risky investment, particularly for small-to-midsize fabrication shops. The potential efficiencies were tantalizing, but between glitchy software and clunky offline programming, many early automation adopters got burned. Among the steadfast skeptics was Bill Pharmer, National Sales Leader of Advanced Fabrication at Airgas.

“People bought into it so they could be more productive.” Pharmer recalls. But as some companies rushed to implement automation without first ironing out the kinks in their manual process, existing procedural flaws just got uglier. “In the end, they just made bad parts faster.”

Now, as robotics sees constant, unyielding improvement, fabrication experts like Pharmer—and the companies that felt the sting of failed robotics programs—are forced to reconsider their outlooks to keep up with an evolving industry.

“If you told me five years ago that I’d be preaching the benefits of robotics, I’d have said you were crazy,” Pharmer admits. “But here I am.”

Getting better all the time

Less expensive and easier to use, today’s robots present a very real opportunity to cultivate a more productive workforce. For the better half of the last decade, larger forward-thinking shops have been adopting automation to take on repetitive tasks—helping free up skilled welders for more rewarding work. Now, smaller operations who couldn’t afford the risky investment before are poised to follow their lead.

One of the advancements changing the minds of some skeptics is the rise of Kinetiq Teaching. For those who are unfamiliar, the process sounds too good to be true: You physically move the mechanical arm where you want it to go to program a new welding motion. It’s not a brand new technology, but it’s becoming more refined, more affordable and more widely adopted in turn.

That kind of user-friendly methodology, plus more accurate offline programming, means a shorter learning curve for companies trying to implement new technology. And with more applications for collaborative robots—which had a significant presence at FABTECH 2017—human and mechanized workers aren’t just existing on the same shop floor. They’re working together and making each other better at what they do.

One of the obvious drawbacks to robotic growth is the fear that they’ll take good work away from hardworking human hands. And it’s a valid concern for more than just welders. From transportation (self-driving automobiles) to hospitality (well, this thing), various industries are finding ways to incorporate artificially intelligent machines into their respective workforces.

So are jobs at risk? Some think so, including some of the world’s top minds. Elon

Musk, CEO of Tesla and SpaceX, asserts that “robots will be able to do everything better than us.” Very encouraging.

But for the time being, the Metfab industry is rolling the dice on robotics—and for good reason. With the age of the average welder hovering around 56, and most shops seeing more retirees than rookies, automation is a good plug for the growing skill gap. In fact, some see it also bringing manufacturing back to the U.S. and generating better jobs moving forward.

“[Advanced manufacturing] requires integration of software and hardware to make [it] work,” Michael Lamach, CEO of Ingersoll Rand, noted in a recent interview. “When you do that, you’re creating jobs that are going to last for a long time.”

What’s cooler than being cool?

More than just longer-lasting, these tech-friendly jobs are starting to make welding a more appealing trade to younger generations. Suddenly the clichéd perception of the weathered blue-collar worker is being turned on its head.

Rob Tessier, Airgas’ National Director of Advanced Fabrication, urges young professionals to embrace this changing perception. “As a young man or a young woman,” Tessier says, “this would be a great time to enter into a piece of business that—truthfully—allows you to be fairly comfortable, understand how to build things and, yet, not get completely filthy, dirty or miserable.”

Pharmer is excited to see welding’s new reputation help employers. “You’ve got to have a Gen-Xer or Millennial in there who’s really good at Nintendo,” he says of today’s welding shops. After a childhood of video games, he poses, twenty- and thirty-somethings tend to be naturally better at—and more interested in—handling controllers in a room full of robots.

While automation is just starting to become the productivity machine it’s always promised to be, the biggest triumph right now is that it’s making welding cool again.

“It’s always been cool,” Pharmer reflects. “Seems like folks are just starting to get the memo.”